I love hearing people tell their stories about how cotton makes them feel, so much so I have welcomed a series of posts on the topic. It isn’t the factual pieces I write like what a cotton plant looks like as much how warm it makes hearts as well as bodies. There have been several of these that I just love!

Well, last week, as I was getting back in the swing of things after the holidays, I stumbled on a post by a writer I met earlier this year while I was in Austin. Addie Broyles does a great job of writing about a family quilt from generations ago. I had to ask if it was cotton and she said she was certain it was! So here’s a short excerpt of it and a photo from her blog… I’m sure once you read it, you will want to follow the link over to her site! I skipped part of it that you’ll want to catch back up on! 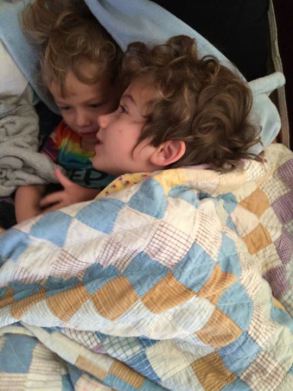 ….. Like always, I slept on the couch under the fern, but this time, I had a new source of warmth: my great-great-grandmother Lena’s postage stamp quilt.

She could have never guessed that that quilt she made when she got to Springfield (at least we think), would still be in such good condition that the newest member of the family, 7-month-old Nash, would chew on its corners.

via Sleeping under a quilt that’s older than all of us | The Feminist Kitchen.

0 shares
« Two City Girls on the Farm for a Day
Which states produce the most cotton? Acres, Pounds & More »