I could be in heaven. America’s Heartland, the awesome show that PBS airs to help Americans learn about agriculture is focused on cotton for an entire show! Yes, it’s a must-see Episode 617 – The Cotton Harvest. While I’d suggest you watch the entire episode, the reality that many of us like to watch small clips leads me to do short blog posts on each segment since the segments really range across the cotton spectrum. 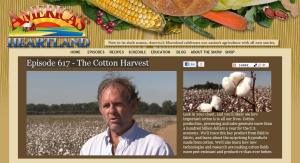 I start where the episode starts — on the Louisiana cotton farm of Jay Hardwick. But first I have to tell you a bit about Jay. I first met Jay more than a decade ago! He’s in Newellton, Louisiana and is an avid environmentalist and conservationist.

Like many cotton farmers, Jay doesn’t fit the stereotype people may have about cotton farmers. His story includes a stint as the art department chairman of Southern Methodist University according to this article by the Delta Farm Press with a great photo too!

And he’s found science and technology are some of his biggest enablers. As Jay says, “The technology that is going into crops to make them insect resistant, this is a huge opportunity for agriculture because up to this point we’ve had to use a tremendous amount of pesticides to grow these crops. Now cotton is being grown with far less pesticides which should be comforting to many, many people.”

Understanding the resources on his farm are the the ones that have provided for the family’s farming successes for generations, Jay and his family consider environmental stewardship a must. In fact, Marshall Hardwick points out that it takes 100 years to produce an inch of top soil so they have to make their decisions based on preserving soil. That drives some of the no-till practices the family has employed.

America’s Heartland is available on many PBS stations throughout the country. Enter your zip code here and find out if it’s airing on your local public television channel. Please note that each station has its own schedule, and not every station is airing the same episode at the same time. You can also catch the show on RFD-TV on Wednesdays at 8 pm EST, and Sundays at 11:30 pm EST. A complete weekly schedule is here.