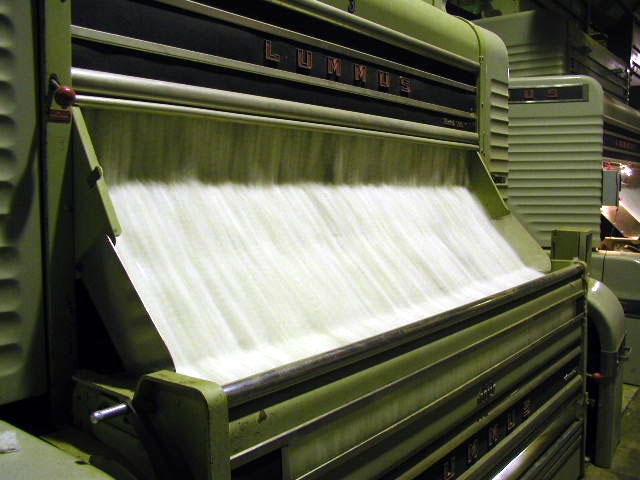 Cotton gins. They haven’t changed the basic function since they were invented but I do know they have changed dramatically in size & speed. At the end of the day, all of them involve separating the seed from the lint. The vast majority of gin use a system of saws (think about the type used in a circular saw) pulling lint away from seed and through to a cleaning system. There are some gins that use a system of rollers rather than saws.

I need to shoot a video and do the voice over because I can’t find a really good one. The ones I find are either don’t include a voice over, don’t go step-by-step or are too long, HOWEVER, this video does a fairly good job of showing you around inside a gin. Since it doesn’t have voice overs, I’ll point out a few things.

At the end of the process, the gin has three different components to deal with lint, fuzzy seed and gin trash.  We will be getting to that soon too!

You can learn more about cotton in the series of Cotton 101 posts or on the Cotton 101 page.

0 shares
« Cotton 101: Getting Cotton to the Gin
Under Armour Makes Friends Where Enemies Once Were »