Recently I saw one of those questions pop up on Quora that made me stop in my tracks as I thought about the various things I had learned from cotton breeders and other experts over the years. The question “How has cotton been genetically modified?” already had two short answers but I knew I would go on at length. Part of the reason is that people in agriculture (particularly scientists) tend to answer very differently than other people so I will try to answer so it works across both groups. 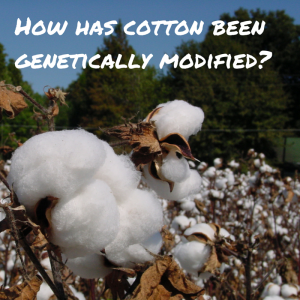 My Definition of Genetically Modified Cotton

In today’s general use of the word, genetically modified typically refers to the traits derived through biotechnology — finding genes that don’t currently exist in cotton but offer a lot of value to be in there. For many of us in agriculture, we think of the broader efforts which include breeding through Mendelian techniques. The sort of thing that breeders have been doing for centuries. I’d like to start with the breeding sort of advancement because that’s the continuum that people like me who have been in the cotton industry for decades think of it as (I currently work at Monsanto and previously was with Delta and Pine Land Company which started its cotton breeding program in 1915). But I will cover genetically engineered too — aka GMOs in the popular sense. I have to say, I go with the popular definition these days. (Some of you may want to read my post about GMOs and the farmers who plant them.)

A lot of this comes from various conversations with different cotton breeders over time, rather than formal research on it myself.

From Wild to Domesticated Cottons

Cotton grows wildly in tropical areas of the world. People discovered it and started finding uses for it forever ago. Wild cottons focus on two things — the individual plants survival and propagation of other plants.

So if you think about that, people have selected for plants that do a few things.  Early on, people started finding cotton plants that had more lint on the boll. Those seeds were planted because people were interested in more fiber to make fabric. Some of the lint would be longer, stronger, etc too so those started being prized because it is easier to spin into yarn for fabric.

But perhaps the biggest change came from getting cotton plants to produce significant numbers of bolls in a single growing season so that cotton, though it is a perennial plant can be planted and harvested as an annual. So the push to find earlier maturing varieties, ways to get more fruit to set, etc. 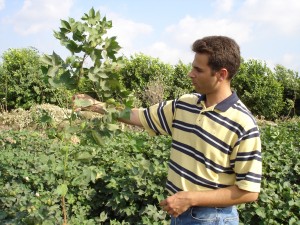 The other characteristics that have been found native to cotton that are really prized are various disease resistances, the difference in leaf hairiness (think about the fuzz on a peach, if that is on the cotton plant it could easily mix in with cotton lint and make the lint more trashy/less valuable. A lot of of these modifications came from people wanting to grow cotton in areas it wasn’t native to, so what challenges did these new areas have that cotton needed to be modified to stand?

Recently breeding efforts have also improved the ability of the  plant to sustain during periods of drought and in spite of wind storms will remain attached to the plant rather than blow away, something that has become more important as weather gets more volatile.

There was a herbicide tolerance trait called BXN that Rhone Poulenc discovered and it offered resistance to a herbicide called Buctril which was pretty good at controlling broad leaf weeds (it is easier to control grasses in cotton since grasses are so different from the crop but broadleaf weeds are tougher, corn is the opposite.) That was in the market in the mid 1990s. 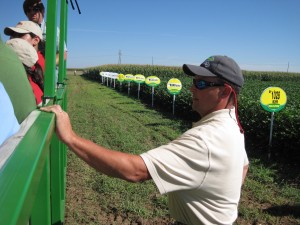 On the biotech side, genetically engineered or genetically modified cotton in the popular sense, modifications have been done for the past few decades and have tended to focus on the two biggest challenges farmers face in production — controlling weeds and controlling insects — both of which can have important yield impacts. As I said above, broadleaf weeds are a bigger pest in cotton than grasses. Although boll weevils are the most widely known insect that impacts cotton. But worms are incredibly damaging and it stands to reason insects would present a higher stress on cotton than some crops since cotton tends to be grown in warmer areas that don’t have harsh winters to aid in insect control. Here’s a good list of the GMOs approved in cotton — you’ll see there are several companies and organizations involved in cotton GMOs including my employer (but this post is based on my experience over my career working in cotton not just at this job).

There are also efforts underway in several other areas of biotechnology including limiting the amount of gossypol (a naturally occuring substance that is toxic to humans and some animals). That work is underway at Texas A&M University by Dr. Rathore. At Monsanto, a novel trait we are working on is lygus resistance. Lygus is another insect pest but unlike works which are currently controlled by a number of traits, lygus pierces the plant to remove sugars rather than munching on the leaves, etc like worms. Because biotech traits are so specific in the way they work, different traits are needed for lygus.