I’ve been asked several times how I could work for a company that cares so little for life that we turn a blind eye to the plight of Indian cotton farmers due to Indian suicides. Some people have heard that farmers there are committing suicide because of the biotech seeds we sell. I’ve had long conversations trying to explain the complicated cultural phenomenon that is at fault and illustrate clearly it is not the seeds we sell. I also have personal connections in India who have made it possible for me to see things for myself, to ask people questions. This blog post on Discover Magazine does a clear job of discussing the topic of Indian farmers committing suicide and the reality is complex:

Ironically, the documentary (Bitter Seeds) that perpetuates the GMO/Indian farmer suicide myth also indirectly captures those complex factors. I was actually quite moved by the film, which showed a side of the story that indicts Indian cultural mores and predatory lending practices way more than it indicts Monsanto. This is a side of the story that the Vandana Shiva’s of the world choose to ignore. But don’t take my word for it; watch the movie for yourself.

The truth is that the real causes of farmer suicides in India cannot be pinned on Monsanto, however venal you may regard the company. To discuss those causes you have to wade into a very complex equation that includes institutional, social, and governmental factors in India.  Doing this requires a cold objective eye and cultural sensitivity. I’m fairly certain that Vandana Shiva, in her heart,  knows well why so many Indian farmers have taken their lives over the last several decades. Just as I’m sure that she knows all about India’s high rate of suicide and the reasons for it. After all, she is a student of inequality and social justice. That Shiva prefers to keep the conversation squarely and inaccurately focused on GMOs and Monsanto reveals to me that she cares more about advancing an ideological agenda than addressing the root causes of suicide in India. That she has succeeded in exploiting real tragedy and distracting conversation away from those true causes is something I find utterly offensive.

via The Real Seeds of Deception : Collide-a-Scape.

Please read the entire article. Reality is the vast majority of Indian farmers have to work their fingers to the bone, they live in tough conditions without nice things like sharp shovels much less tractors. I want to help them improve their lives, make it possible to send daughters to school, have clean water available to them (many carry water for miles to get it to their homes) and to produce enough of a crop that they can sell it fairly. 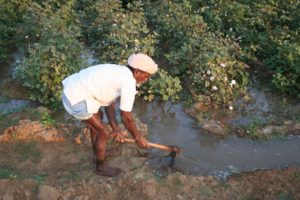 I was lucky enough to visit India several years ago for work and while there I took some vacation time to visit my friend Geeta’s village and several other places. Seeing what the vast majority of of the Indian public deals with on a daily basis was hard. You see women and children doing heavy labor — picking cotton would be seen as light work compared to the people hauling bricks. You see people using animal dung as a heating source, even for cooking. You see people begging on the streets in ways that make you realize Slumdog Millionaire was probably all too accurate in portraying. Below are some of my trip photos that show you what I mean.

When you live in a world where people complain because the restaurant we are at doesn’t have the exact soda we like, it’s hard to imagine the challenges Indian farmers can face. I have to make myself remember and I have to keep talking to people who can help me see the difficulties in Africa and other world areas. And it’s nearly impossible to understand that a technology that offers a way to limit exposure to insecticides is more than a way to make the job easier, it has the potential for changing your health for the better as you and your kids are no longer breathing in insecticides as you walk the field.

I can see how its easy for people to be vulnerable to stories that sound like an injustice is being done. And injustice should bring outrage. But sometimes what we read on the internet is just a story and the storyteller may have a different agenda than they admit to, like Keith found while at the Botanical Garden.

This brings me to a point I really need to make….

Before you believe the things that are said on the internet, do some research. That can be said of this article as well as the ones that make the other claims. Look at the sources you normally agree with and some of the ones you may not, look for people or groups who may be experts on a topic who aren’t out on book tours, who may just be trying to make a positive difference. There are a lot of people on the internet who use fear as a motivator in others and they manipulate facts. There are also a lot of people who would like to have the truth heard…. they just don’t

I’m okay answering questions about these things as long as people are okay thinking through various information, some of which may not be in line with other things you’ve heard. Use those critical thinking skills we used to cultivate so much as kids and question folks who make big statements about things you are unfamiliar with…. if they really want people to understand what’s happening in the world around them, they will be fine taking time to answer your questions.

Ellen at OneHundredMeals.com also wrote a blog post about an encounter she had with Vandana Shiva. I have never met or heard SHiva speak personally, but have seen video that I felt was incredibly mileading and done so for her own reasons other than honesty.

(Feel like I should remind you about the disclaimer at the bottom of this page. These are my thoughts, not thoughts I am paid to articulate. Now back to work I go.) 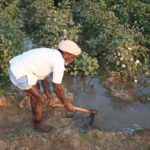 0 shares
« Cotton Gin in Kansas Made Me Pump My Brakes
How Much Cotton is in That Field or Module? »