There is something about the World Series. I can’t put my finger on it but it draws me in time and time again. Even if I haven’t watched much baseball during the season, the playoff season tends to grab me even if my team is totally out of it. I admit it. I am a baseball fan. I love agriculture and the two things sort of merged in a post I wrote this spring cause it was clear that spring training was much like farming to me. And as we look at the final few games of major league baseball this year, it seems appropriate that farmers are harvesting their crops across the country.

But across the Cotton Belt, and actually across farms across the U.S., farmers are picking sides. I see it in my Facebook feed and my tweets every game. On the surface, most people would assume cotton farmers divide their allegiance between the teams in the heart of the Cotton Belt. The teams that come to mind are the Atlanta Braves, Texas Rangers, Arizona Diamondbacks…. but you may not know how many in the Cotton Belt are also fans of the St. Louis Cardinals. There are a few reasons:

So it shouldn’t surprise anyone that farmers in Tennessee, Arkansas, Mississippi and other states are pulling for the Cardinals…. and some of them are showing it in unique ways. Check out what my friend Tracey Sullivan saw while driving on Highway 51 near Ripley! I’d say that cotton farmer really loves the Cardinals! (If you know cotton farmers who are cheering for the Rangers in such dramatic fashion, I’d be willing to give them a nod too.)

How do you show your pride in sports teams? 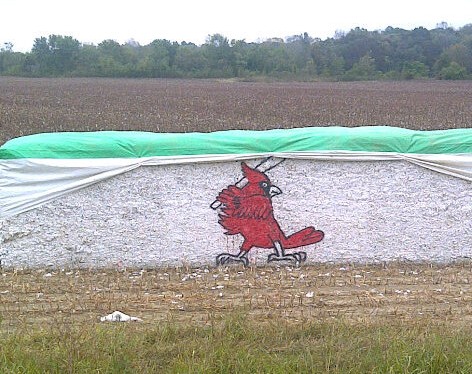 STL Cardinals on a cotton module